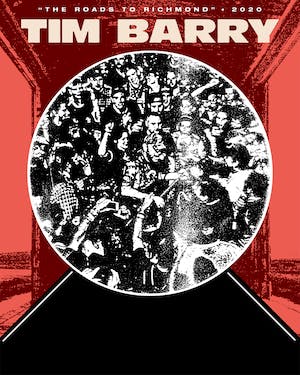 Tim Barry is always working, that’s just how he operates. “I wake up early, I run far, take care of my kids, I get to work, and I only sit down when I go to sleep,” Barry says of his day-to-day. That’s proven by the fact that, if you’re a fan of his work, you’d be able to fill a shelf with records of his — five full-lengths, a collection album, and a live record — each one documenting his progress as an artist, but also as a person. And on October 11, Chunksaah Records will release Barry’s sixth album, The Roads To Richmond, another step in the journey that began nearly 15 years ago.

While Barry’s albums are always built on his personal experiences, none have felt as raw as The Roads To Richmond, which plays like journal entries ripped out of a notebook then set to music. Written largely outside of his hometown, the songs on The Roads To Richmond chronicle a period of transition, the product of an artist working to re-establish normalcy and find his way forward.

Recorded once again with Lance Koehler, this time around Barry completely shifted his process, recording once a week in three-hour sessions without any concept of what The Roads To Richmond would end up being. There were no demos, and there was no map for what the album would look like when he was finished. He had 40 songs, and he recorded as many of them as he could, only letting the very best of them surface here on The Roads To Richmond. “This record is pretty harsh, in a lot of ways,” says Barry. “Many of the songs that are first-person on this record, the ones that seem really miserable, were written as those things were happening. When you go through a really dark spot, it really is just a matter of time before you gain perspective and things aren’t so dark. But to capture the moments in those dark spots is really remarkable.” That’s part of why talking to him about the album not only feels intrusive, but a little redundant. Everything you need to know is right there in the music, and that’s the way it should be.

From the very start of “Big Ships,” Barry appears as vulnerable as he’s ever been. Always a commanding presence, on The Roads To Richmond, his voice quivers delicately, each word cracking under the weight of his thoughts. “It ain’t the years that aged me, it’s the miles on this sea / And there’s no one to blame but me,” he sings, an acknowledgement of his restless ways, and the toll those things have taken. It builds to a simple, tossed-off phrase, one that’s both plainspoken and poetic, “I’m just trying to get through another day.”

That ethos runs through much of The Roads To Richmond, as Barry analyzes everything that’s changed in his life while working to find the meaning in all of it. The music gently grows around his lyrics, each line landing like an unexpected gut-punch only to have the beauty of the compositions ice those wounds. With The Roads To Richmond, Barry has put himself on full display. Not because he wants to, but because he has to. A song like “April’s Fool” is about as transparent a view of him as one can get, as he delivers lines like, “I can live hard, I know / But our kids can’t / And I can’t stand to be alone,” with a weariness and clarity that avoids melodrama at all costs. It’s as honest as he can possibly be, proving once again that Barry is as much a songwriter as he is his own biographer. His work, and his songs, are expressions of someone that has never had things come to him the easy way, every song a fight to better understand himself and the world around him. “I have no idea what compels me to do this,” he says. “It’s almost to a point where I just have to accept that writing songs, that’s why I’m here.”

There’s a line on “Raised & Grown” that, in perfect Barry fashion, sums up his entire approach to music: “I’ve said enough, and I’ve meant it all.” It speaks not only to who he is, but it also highlights why people care about his work so deeply. It’s music made by a restless soul that’s constantly searching for meaning, and it’s embraced by the people who find little moments of clarity in hearing that journey play out, record after record.

Anika Pyle is a double virgo feminist who is not afraid of her feelings. She fronted the recently retired pop punk band Chumped and now steers the helm of her latest project, Katie Ellen. In addition to writing songs, Anika writes non-fiction and poetry.