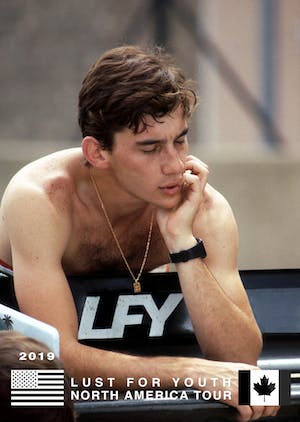 Pirouetting on decadence, meeting eyes with a dizzy sensation, falling and flying at the same time—Lust for Youth have continually held poise through the most vitalizing of times. Their new album, a self-titled collection of eight songs, is sure-footed where they had earlier feared to tread, and light-headed for a new set of reasons. The album is driven by a dance-pop agenda, hustling its way through upbeat peaks that level out into reflective ballads. While still taking clear cues from a crop of austere synth-pop, Lust for Youth sound brighter than they ever have before, taking tips from some of the flirtiest Eurobeat to aid their new direction.

On their previous album, Compassion, Lust for Youth examined euphoria and contemporary life with a wry wit. Where facetiousness masqueraded as commitment, compliments and fawning clearly yearned for a true connection. Lust for Youth sees Hannes Norrvide and Malthe Fischer taking some familiar strides, though to another place. The disaffected balearia is this time rendered into brighter pop compositions that bustle with intricate production. No longer galvanizing us with hooks, but with a songcraft unhindered by anxiety, the album presents a cohesion not seen in the project until now. Lyrically, the apprehension still hangs like tinsel. Often garish and celebratory, the droll mischief is this time more pointed, more personal, and far more self-aware. A thread of reflections upon the state of the world is artfully wound throughout the album, casting a quiet force upon the detachment of Norrvide’s vocals.

Lust for Youth have been one of love’s most honest confrères, detailing the pangs of what is all too often a sullen process. On this occasion, they look up. The pull of the world is different for us all, but it pulls us all.

Korine was officially formed in 2017 by Morgy Ramone and Trey Frye following a handful of prior demo releases and solo performances under the moniker by Ramone. The late 2017 self release of their first EP “Corsage” caught quick traction and landed the duo a nationwide tour in May 2018 supporting Timecop1983. Following this debut tour and several well received performances the pair went on to release their first full length LP “New Arrangements” on Born Losers Records in October 2018. A successful solo tour following the release furthered the band’s reach and solidified Korine as an indisputable rising act of 2019. Korine has performed with several notable acts including Light Asylum, Covenant, and Trisomie21.

Emerging from the fertile, thriving music scene of Philadelphia, Arch of Love made their 2019 debut with the impressive single, "Night Walk." Comprised of partners Chelsea Brennan and Chris Schackerman (formerly a touring member of The Pains of Being Pure at Heart), the duo weave influences of '80s new wave with contemporary synth-driven sounds. Their follow up single, "Say" was described by Brooklyn Vegan as ""...anthemic and danceable, with just a hint of New Order and The Cure."