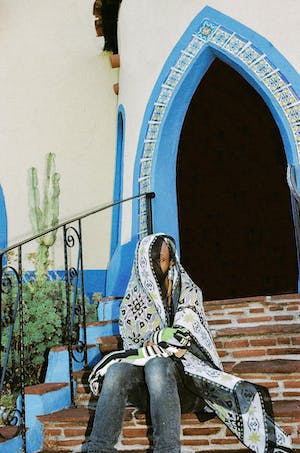 iCal
Google
Due to incredible demand, the JPEGMAFIA show has been moved from the First Unitarian Church to Union Transfer. All tickets honored!

Often, art is considered the safe space for dangerous ideas. JPEGMAFIA is a reminder that in a dangerous world, sometimes nowhere is safe. Operating out of Baltimore Maryland but born in New York to Jamaican parents, JPEG spent the bulk of his childhood in East Flatbush, Brooklyn – a neighborhood deeply rooted in West Indian culture and black pride – & the majority of his mid teens in deep south rural Alabama – bouncing from place to place due to rough circumstances at home & after a short stint in prison due to a racially-charged altercation in his late teens, JPEG joined the military where he’d be deployed to different parts of the world, meeting fellow artists and adding new elements to his producing and rapping repertoire.

If trap music is the sound of the street, then JPEGMAFIA is trap’s subconscious; dark but not without a humor that makes things even more uncomfortable. His role as villain or satirist, hood protector or nihilist is intentionally hard to put one’s finger on. What more appropriate way to embody the frightening and confusing reality of America today?

JPEGMAFIA’s lo-fi approach, political lyrics, ethereal noisy beats and genuine roots in the underground scene are refreshingly visceral & have made him one of the hottest, relevant & important rappers in the country. His work has been covered by Pitchfork, MTV, AfroPunk, Noisey/Vice, Impose Magazine, Pigeons and Planes, Mass Appeal, The Wire and many more.

Butch Dawson is a rapper and producer from West Baltimore. Inspired by melodic jazz elements and heavy bass driven sounds, this signifies him as one of the most experimental artists coming out of Baltimore City. Butch is also the founder of Basement Rap Recs and looks forward to the productiveness which he chooses to live on a everyday bases. He is the executive producer and host of the monthly “Basement Rap Radio” mix, the in-house producer for Basement Rap and has produced for well known artist such as Black Zheep Dz, Little Pain, A$ton Matthews and more. In the past 3 years, Butch has dropped 3 rap projects. One including a joint EP with Baltimore singer Elon, and his recent mixtape “Dawson’s Creek”. He has collaborated with artist such as Kemet Dank, Abdu Ali, Lil Yachty, D.R.A.M. and more.