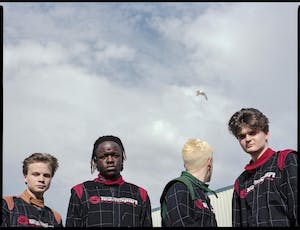 You can hear black midi’s rehearsal space from the other end of the road. A rhythmic racket blasts from behind the iron lion knocker on the door of a dilapidated Georgian townhouse in south west London. It’s only when they’ve finished playing that they can hear it bang and let you in…

Inside, the energy only lessens a notch. Geordie Greep, black midi’s curiously voiced singer, and guitarist Matt Kwasniewski-Kelvin sit with guitars on their laps, occasionally flickering out riffs to illustrate a point. The repartee between the pair, and bassist Cameron Picton and drummer Morgan Simpson, is quiet but quick and laconic.

It’s a connection reflected in the intensely focused and driven live shows with which black midi have made their name, Over the past year or so, this fearsomely youthful group - Greep and Picton are 19, Simpson and Kelvin just a year older - have built a reputation for fierce, uncompromising and ever-evolving live shows that, though they’ve drawn comparisons to the likes of Shellac, sound like nothing else around at the moment. After a series of early gigs at Brixton’s Windmill, their increasing reputation led to requests for support slots with Shame, and a debut American tour that saw them win over new fans at SXSW and beyond.

black midi bonded over shared musical enthusiasms, or “liking messed up things” as Kelvin puts it, including an appreciation for rapper Danny Brown, Death Grips, Deerhoof, Miles Davis and Talking Heads, who they like so much they called a song… Talking Heads. Greep says that “we’ve always tried to make it heavy but danceable, melodic but good rhythms. It is accessible music, there are experimental aspects that we’ve taken from when we went crazy at the beginning, we’ve just reigned it in to make something that is pop music.”

It feels like an explosion from a group of young men who have long been steeped in making music. Morgan Simpson grew up in a church and took up the drums when he was two. Greep started out playing along to the likes of Franz Ferdinand’s Take Me Out and Black Sabbath on “the OG” Guitar Hero. “I was like ‘this is badass’, I thought the songs were sick so I borrowed CDs of my dad, I got into that music and thought ‘now let’s learn the real guitar’”, he says. The foursome all met at the Brit School, the music college that has turned out the likes of Adele, and are full of praise for their education and teachers for giving them a vital grounding in musical collaboration.

While studying, the group paid their way by teaching music and doing sessions for friends, and Greep and Kelvin would go busking in Bromley. This actually ended up giving them one of their best songs, Ducter. “Back when we were kids, well three years ago, but when you’re a kid, busking is a chill way to make money. Some days versions of Jimi Hendrix’ ‘Purple Haze’ and blues and soul tracks might yield a couple of hundred quid, others were less lucrative. Sometimes we got £5,” says Greep. “It was one of those days when we got £5 and we thought, ‘let’s just jam our own stuff.’ People were saying ‘what’s going on?’”

When the group began, they had far more rules and regulations about what should and shouldn’t be done. This evolved, says Greep, into an “anything goes” policy of experimentation, “if it works, if we keep thinking about it, just do it. If it doesn’t fit then who cares?” At first, the music they were making was “an ambient, droning, noisy thing” as Greep describes it, mutating into something reminiscent of Swans or the Boredoms, before songs like bmbmbm and Speedway started to take shape.

These tracks were recorded in an initial burst with Speedy Wundergrund producer Dan Carey. In November, black midi retouched older recordings, laid down eight songs in just five days. The process has been one of refining and evolving tracks around the initial structures, where five hour jams might yield up a riff that then becomes a few bars of a song. The band are full of praise for Carey and his unfussy approach: “he’s just really quick,” says Greep, “some producers will talk for ten minutes about whether to put maracas on a track, but you suggest maracas and Dan Carey will already have them out and you’re recording a take”. Simpson adds that “he doesn’t have an ego, and a lot of producers do. If you want to do something, anything goes, and I think that really compliments the band ‘cos we have the same attitude. We do things at the right time, there’s no point doing it before you’re ready. You might as well wait until you’ve got the opportunity to record it in a sick way and when we’ve got the songs exactly where we want them.”

As anyone who’s been lucky enough to catch black midi live over recent months will testify, these songs are slippery creatures, the sparks from a musical unit that’s constantly in a state of flux and development. After all, they’ve promised that in a few years time, the music of black midi will be unrecognizable from how it is now. “It’s a bit bold, but you’ve got to set yourself challenges, there’s no point doing the same thing over and over again,” says Greep. “Even now the music we’re doing in this room is sounding very different - it’s an ever-evolving thing”.

Hailing from Houston’s Third Ward, Fat Tony (born Anthony Lawson Jude Ifeanyichukwu Obiawunaotu) is a Nigerian-American artist who has played an integral role in shaping the Houston rap scene. Pitchfork has described him as "a reliably funny, incisive, trend-dodging alt-rapper." He is the host and co-creator of "Thrift Haul with Fat Tony" on Super Deluxe. He was a host and producer on Viceland's "Vice Live" in 2019.

Heavily influenced by renowned Texas rappers like Devin The Dude and UGK, Fat Tony began making music and playing live shows at a time when there wasn’t much of a scene for young artists in Houston. Inspired by the independent spirits he looked up to—from Prince and E-40 to Bikini Kill and the Bad Brains—he began throwing shows at local venues and friends' houses. He booked bands of all types from all over, hand-made flyers and mailed them to addresses nabbed from the student directory. Meanwhile, he has toured internationally and earned a rep as a fierce performer.

Fat Tony won awards in 2008, 2009, 2010 and 2013 for Best Underground Hip Hop at the Houston Press Music Awards, and has worked on groundbreaking collaborations with the likes of Das Racist and A$AP Rocky.