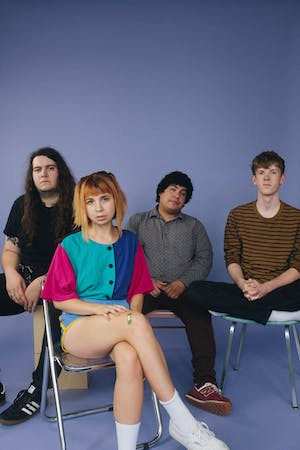 Beach Bunny is the singer-songwriter project and stage name of Lili Trifilio, with tunes reminiscent of alt-pop and "sadgirl" music, beginning in 2015. Adding musicians Matt Henkels (guitar), Jon Alvarado (drums), and Anthony Vaccaro (bass) to her live performances in 2017, Beach Bunny is a Chicago act you don't want to miss.

From people falling head over heels for Lili's sweet voice and catchy composition style, her latest release Crybaby took Chicago by storm. Drawing inspiration from heartache, her brother fighting cancer, struggles of being a female in the scene, and everyday obstacles - you can listen to Beach Bunny on almost every streaming platform.

Described as "Zooey-Deschanel-meets-the-Beach-Boys-type vibe" by Crafted, stay tuned for what's to come from Beach Bunny this year.

Slow Pulp is a Wisconsin born, Chicago based rock quartet. Somewhere between anthem and lullaby, their music hints at a mess of contradictory emotions wound up in a gentle yet incisive wit.

MICHELLE is a R&B/indie pop collective consisting of 8 NYC teens. Like NYC itself, MICHELLE’s debut album Heatwave feels more like a collection of stories than one overarching narrative. Weaving in and out of R&B, 80’s synth pop, jazz and indie, with 70’s inspired basslines, driving drum beats, plush synths and enticing vocals, MICHELLE is solidifying itself as a part of a new wave of authentic New York R&B. This eclectic collective, based on production and arrangement by Julian Kaufman and Charlie Kilgore, with singers and instrumentalists Jamee Lockard, Layla Kuriloff, Isa Reyes, Sofia D’Angelo, Emma Lee, and Rix Chan, is refreshingly full of queer + POC teens, showcasing a new era of pop music. Written and recorded in Julian’s bedroom over the span of two weeks, Heatwave captures a collection of moments – snapshots of youth in a New York summer, all immediately recognizable to those who’ve lived them and those that have wished to. Heatwave represents a deep breath – a first step back into the city after the members of MICHELLE spent their first year at college. It’s a sticky, sweat-drenched celebration of New York. Heatwave’s catchy hooks and smooth production is undeniably infectious. Recently featured on Spotify’s “All New Indie” and “Bedroom Pop” playlists and on David Dean Burkhart’s YouTube channel, it’s clear that audiences are loving MICHELLE just as much as they enjoyed creating this album.